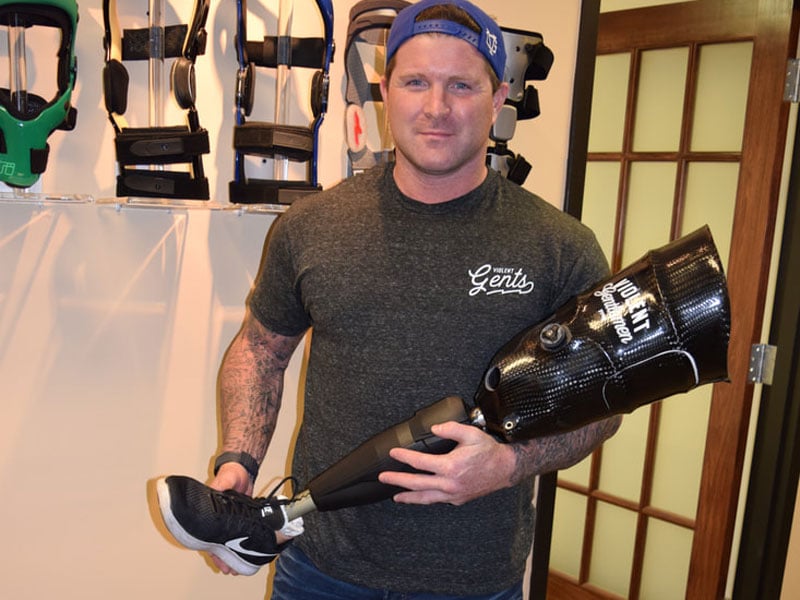 He battled back from the brink of death. Now he’s back fighting fires.

Mike Laughlin never saw the deer that ran out of the woods and into the side of his motorcycle.

Moments after the impact, the Kingston, Ont., firefighter, who had been enjoying a country ride on his Harley-Davidson, was lying at the bottom of a ditch with a broken neck, a broken back and his right leg torn off at the knee.

Alone, bleeding and in desperate pain, Laughlin managed to pull his mobile phone from his back pocket.

But he didn’t call 911. Instead, Laughlin called his own fire dispatch centre for help.

“They picked up in one ring and said, ‘Hey, Mike, how are you?’ I started to yell over and over that I was dying.”

Within 15 minutes, firefighters were at his side. They were soon followed by an ambulance and a team of paramedics, who raced Laughlin to Kingston General Hospital, where surgeons saved his life but not his right leg.

He believes he is the only firefighter in Canada on active duty with a prosthetic leg above the knee. Working toward that accomplishment — a massive physical achievement given the demands of firefighting — is what buoyed Laughlin after each of his seven surgeries and during the long months of rehab.

“I wanted to be the first, I wanted to be the person who showed it could be done,” he says. “Without that goal of getting back on a fire truck, I don’t know how driven I would have been to get better so fast. That pushed me every day to work hard, to get back.”

Laughlin remembers doing everything right on that sunny June day in 2016 when he decided to take a late afternoon motorcycle drive on a winding country road.